Knock Knock! Who's There? Trout...Trout Who?

This could be one of the most exciting discoveries I've ever made in fishing. You won't read about it anywhere. No one has stood up and claimed anything of this sort. It might just be too...
dirty, way too dirty to speak of?

"How dare you say my precious trout eat from the muck and silt in the bottom of deep pools. You are absolutely out of your mind and should be banned from fishing forever!"

It's easy to be pulled into time honored traditions and forget that fish, no matter what the species, are opportunist. Fish are so successful cause they have almost no purpose other than to survive. In fact they can survive and adapt quite well, but not always in ways that our traditions have taught us.

Over several years and multiple situations I've encountered a bite and/or catch that had me scratching my head. At the time I didn't even have explanation for it other than it must have been luck. As I pondered all the times I've encountered this particular type of bite I realized they all had a common trait. That trait was the bottom.

The bottom content consisted of muck! Dirt if you prefer. We can also call it silt. In every situation my fly or lure was sitting motionless on a mucky bottom then with a slight twitch that fly or lure was violently pounced on.

My most recent experience involved a very long, large and deep tailwater pool. I tied on a JDM lure made by Smith Ltd called a Bottom Knock. This lure is the only kind I know of that is made to do exactly what I wanted it for and that was to work the bottom. Its submarine shape has the tie on eye on top and balances horizontal like a jig. One single hook on the back joined with a small snap ring. It's pretty featureless except for feeling pretty heavy in hand. It throws very well on BFS gear and establishes bottom very quickly. 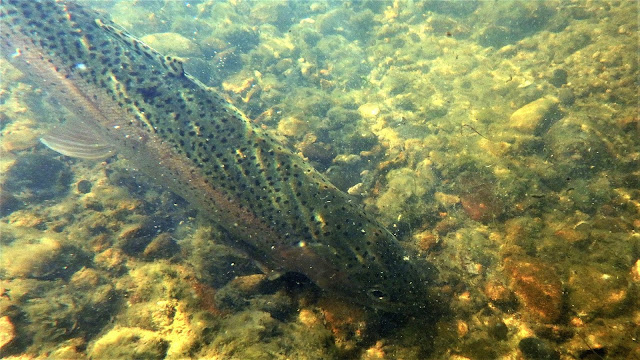 On this day I simply worked it like I was working a finesse jig for bass. I twitched it up then sat it down while keeping a taut line. Waited a couple seconds and did it again. Halfway back on one retrieve after twitchin up I lost feel of the lure. I reeled in the slack and it came tight. Thinking it was probably a snag I gave a hard jerk and immediately it came to life. A good battle took place and up came a beautiful 23" fat rainbow. Oh and in case you were questioning, yes, it was hooked in the mouth.


On this experience I did not feel the strike and I have to believe he took it on the drop right after an upward twitch. It was a respectable catch and without a doubt the best catch of the day.

On one particular day after breaking for lunch on shore of a large pool I picked up my ultra light spin rod which had a Blue Fox Vibrax spinner in size 1 tied on. I think the color was copper. I had been making some random cast and retrieves with minimal success. The thought occurred to me to just try this bottom thing theory. 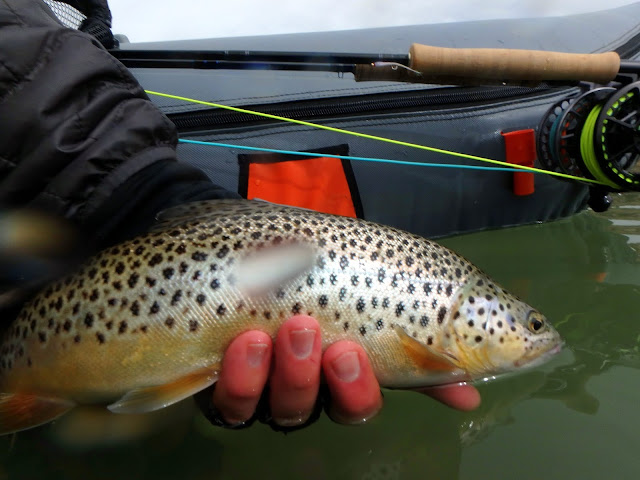 I had already made 5-6 fan cast covering the water directly in front of me. I cast out again, retrieved the lure in a little ways and just stopped it, letting it drop to bottom. Next, I gave a count of about 5 and than just twitched the lure while it laid on bottom.

In the next split second it just got hammered. I set the hook and up came a very respectable Brown. I went on to catch about 5 more from that same area using the same technique.
My fishing buddy, also working a spinner was catching nothing so I told him to duplicate what I was doing. On the next cast he hooked up and we had a double going. He also had a spinner of some type tied on.

On this day, I really don't feel like the lure was important but instead it was the movement in the silt that triggered the strikes.

On the Swing, But not Swinging

On a fall day I was fishing a slow flowing back channel on a pretty famous western tailwater. I was fishing a two hand spey rod and had a tandem fly rig consisting of a soft hackle and small bead head nymph. I was casting across the slow flow and swinging the flies quarter downstream and not getting any action. I decided to change from an intermediate sink tip to a faster sinking tip. The sink tip was just heavy enough to make the flies stall out in the light current and settle on the bottom of this small channel. The channel had silty bottom content. 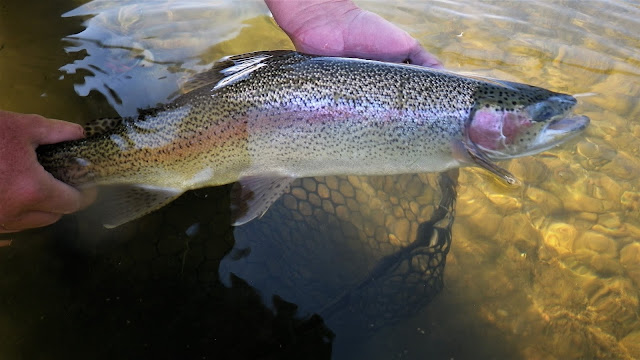 I could tell my flies stalled out on bottom because my swing just died. I waited a few seconds just to see if it would pick up again and they didn't move. So I gave my line a slight twitch to help it get moving again and instantly it was hammered.
Up came a very nice rainbow and several cast later doing the same technique brought several more to hand.

The trick was those flies had to rest on bottom for a period of time followed by a slight twitch. Without that nothing would give them a second look.

On a cold winter day I was wading a tailwater stream and not having much success. I had walked down to a back eddy area and was stripping a leech fly through it. Something distracted me and I stopped my retrieve and just let the fly die in its place. After my distraction I picked up my line and gave it a strip. In an instant it was hit hard and I set the hook. A good fight took place and I landed an 18" rainbow. 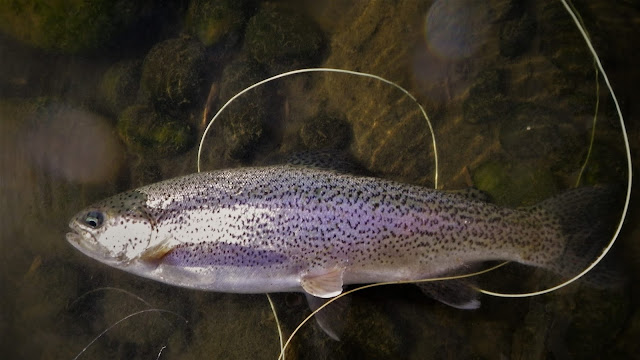 I remembered being very intrigued about how it all went down. After making a couple more cast I waded over to examine the area this just took place. There was really nothing that looked at all like a good piece of holding water. It was just a soft silty bottom.

I could go on with more stories but the common denominator to every one of them is a silty bottom and long pause followed by a slight twitch. I chose these four examples to demonstrate that in every case the lure or fly was quite different yet the technique ended in the same result.

I don't really feel like I have discovered something as much as I have laid forth a pattern. See, I believe anglers create this scenario quite often without really knowing it. I've watched many guided boat anglers fish nymph under indicators real slow with long leaders, longer then the water is deep and catch fish. I'm sure their flies were dredging bottom.

Have you ever heard the old saying, the difference between a good fly angler and a great fly angler is one split shot. Most of us know that oftentimes trout are found near bottom so we must fish deep for them. Does anyone ever stop to think that maybe they are feeding from the bottom?

Early in my article is an example of the tongue lashing one could expect if ever openly talked of the notion that trout may actually eat things living in the silt on the bottom of our lakes and rivers.

In order to discover the truth of this technique we must first accept that trout might actually eat things living in the dirt.

I want to continue my experimentation. I am going forward with my style of Bait Finesse described in the most recent experience. To me this is not really any different than bottom contact finesse style fishing for bass. I will use my Area BFS gear with super light line and the Bottom Knock Lures I described earlier.

The really cool part of all of this is I find myself fishing areas where others are not fishing. This opens up Untapped Water for me and lets me fish to the fish that are far less on guard. It's a stealthy approach with a finesse feel and takes me back to a calm and peaceful place, a place of discovery.
Posted by Dirty Angler