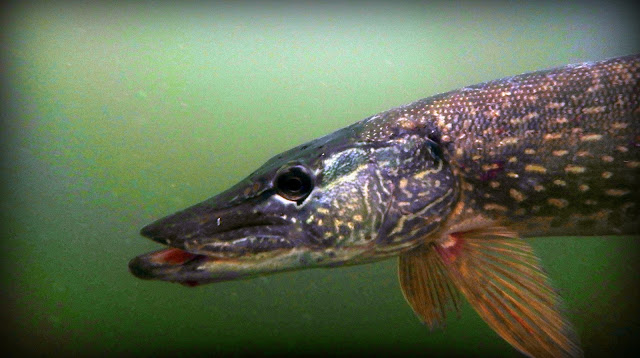 A recent adventure took me to a lake that reacquainted me with an old toothy friend Esox lucius or Northern Pike.


My first encounter with toothy critters was with a Gar on an Ohio River tributary called The Great Miami. Near impossible to catch but one of the most intimidating fish I have ever handled. The only creatures I feared more in that water were the snapping turtles.
My next encounter although certainly toothy it was the giant eyes of the walleye that memorized me.
The next fish with teeth that came to hand was the prehistoric looking Northern Pike.
My first pike came to hand from a canoe on a little watershed in southern Ontario. I was not even sure how to handle the scalely creature so I grabbed on behind the head like I've seen others do from pictures and carefully removed the hook with pliers and immediately literally threw it back in the water as to get it out of my hands as quickly as possible. Since that first encounter I have handled dozens of these toothy critters and today they are not quite so scary. Just don't stick your fingers in their mouth. The long body predators handle well cradled in your hands and often need some rest time in the water to fully revive after a fierce battle. Be sure to take your time and be patient in releasing them.

My latest experience with Esox came while fly casting a big deer hair frog for bass. I've read Navajo lake had pike but was not expecting this sudden encounter.


I was navigating the long narrow Pine River arm when I came up on some rocky shoreline with scattered submerged brush. It had the look of fishy water so I shut down and dropped my trolling motor and started casting. 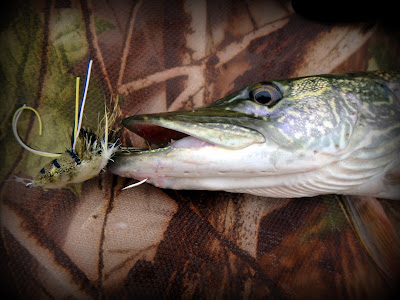 My deer hair frog throws well on an 8 weight Sage Method. Many have noted that this powerful 8 weight is too big for bass but I'm hunting big bass and my bugger beast box of flies resembles something more of a tackle box than a fly box.

Several cast later while I glanced away from the frog taking in the landscape came an eruption of the water's surface. I didn't see the strike but by the time I looked back the only sight I saw was the ring of moving waves going away from where my fly was last seen. Taking up the slack line I put my fly rod to the wood on the hookset. My line came tight with a feeling that I just set hook on a brick wall. At that moment I knew that I had either snagged something or there is a real fish on the end of my line. In an instant my rod goes into action with violent shakes and all I can imagine is a real trophy hooked.

Somewhere along the way of many years of fishing I have unknowingly come to learn to relaxed and keep my cool on a possible fish of a lifetime. Keep tight to it and let your rod and reel do what they were designed to do. When I predator fish I will do a second hook set on big fish. My theory is better to get it stuck good and get it to hand than watch a fish of a lifetime get free itself inches away from being netted. Some of my lifetime best catches got away with just a glimpse. I assume if the fish comes unbuttoned on that second hookset than it probably was never going to be landed anyway. I fish strong tippet and I trust it and to this day I have never lost or broke off a fish on the second set and I can't remember the last fish that got away.

The fight in this fish was strong and he kept his head down. At this time I had started questioning the species on the other end. He ran enough to take up all my loose line and I let the drag on my reel to get some of the action. My rod and reel helped wear him down and soon I had cranked him in close enough to get my first look.

Next came the feeling of excitement and disappointment all at the same time. I caught a great toothy pike but it would not be the big trophy bass I long to catch.

By this point in the fight I was not surprised so excitement won out. The frog was hooked perfectly in the lower lip and luckily not to deep that his sharp teeth could have severed the line.

He remained calm while I removed the hook and let me snap a quick underwater photo before he shot away on his own power.

I went on to catch another toothy on that trip in an almost copy cat story. The experience revived some memories from days gone by, good memories. I believe I may have to go back and do it again.